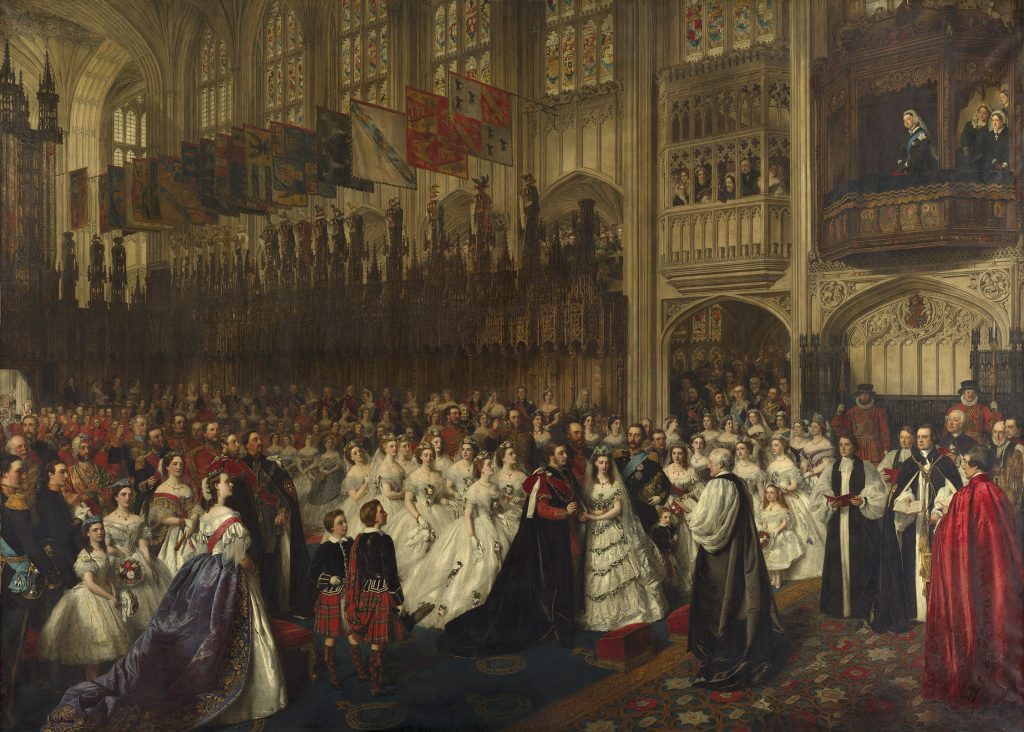 The Marriage of the Prince of Wales, His Royal Highness, Prince Albert Edward (the future King Edward VII), with Princess Alexandra of Denmark, took place at St George Chapel, Windsor, on 10th  March 1863.   Marriages of the Prince of Wales have been fairly rare events in English history: only the six have taken place since the creation of the title in 1301.  The public saw the marriage as nothing less than ‘a love match’, free from the diplomatic entanglements of the past; in fact it was the product of five years’ hard work behind the scenes.  Queen Victoria and Prince Albert had begun the search for a bride in 1858 believing that an early marriage would ‘settle’ a ‘difficult’ son and Princess Alexandra of Denmark was the bride selected.

The Daily Review (Edinburgh) Thursday 12 March 1863 has a report on the festivities organised by the town of Kelso, and in which The Tweed Lodge of Kelso No 261 played an integral part:

“KELSO. The marriage day of the Prince of Wales was celebrated here with every demonstration of enthusiasm; but the rejoicings were much clouded by a series of domestic bereavements which prevented the Chief Magistrate, Mr Darling, the minister of the pariah, Rev Mr Smith, and the Rev Mr Renton from taking any active part in the day’s proceedings. The rejoicings here commenced with a grand procession of the Volunteers, and the Masonic and other bodies connected with the town.  The procession was marshalled in the Square, all the houses in which, including the Town Hall and other public buildings, were gaily decorated with fags, emblems, and devices of various kinds. The procession was as follows:

The Lodge has in its possession a ceremonial sword inscribed “Sir George Douglas Roxburgh Rifle Co Kelso”. Whether Sir George was a member of the Lodge has still to be researched. 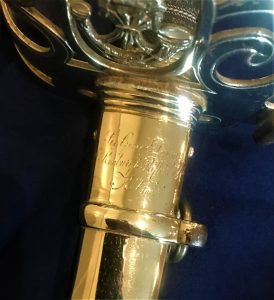 The procession was accompanied by the band of the 2nd Roxburghshire Volunteers, and the band belonging to his Grace the Duke of Roxburghe, and was accompanied along the line of route by an immense concourse of spectators. After marching through the principal streets, the procession took its way to the Square. The Rev Mr Smith then offered up a most appropriate and impressive prayer, imploring the Divine blessing on the union of the Prince and Princess of Wales.  A feu de joie was then fired by the Volunteers, and a royal salute from several large brass guns stationed in the park. The procession then re-formed and proceeded to the Square of Kelso, where the different public bodies adjourned to their respective lodge rooms.

In the afternoon, a public dinner of the inhabitants was held in the Town Hall, which was profusely decorated for the occasion. The chair was occupied by Mr John Usher, Stodrig (in the absence of Mr J S Darling, senior magistrate, from the cause stated above); and the croupier’s chair was filled by Mr Balman, builder.  The usual loyal and patriotic toasts were given and responded to in the most hearty manner; and the toast of the evening was received with unbounded enthusiasm. A number of loyal and personal toasts followed, and the evening was spent in the utmost harmony.

Towards night a huge bonfire was lighted in the Market Place—the wood of which had been kindly granted by Sir George Douglas, Bart, and an immense crowd enjoyed themselves in the Square for several hours, by firing off squibs, and other descriptions of fireworks.

A soiree was also held in the evening, in the Corn Exchange, “under the auspices of the ladies of Kelso,” which was pretty well attended. The chair was occupied by Mr Thomas Mitchell, draper, and addresses were delivered by several clergymen and laymen. The proceedings were varied by the singing of several songs by amateurs, including an original song composed for the occasion by Mr Usher, Stodrig, and the playing of a German band. Tea was served by a number of ladies, and the meeting was kept up with spirit for several hours.

Among the many displays of loyalty here, none were more conspicuous than those which took place on the property of Mr Robertson of Ladykirk, MP, the Lord-Lieutenant of Berwickshire, on the northern division of his estate in the pariah of Gordon – a short distance from Kelso.  Some time ago, Mr Robertson intimated to his tenantry that he would not only grant all the materials for bonfires, but would in any other way contribute to such a laudable mode of rejoicing.  Conspicuous among the many fires that studded the various hills in this district was one erected by Mr Henderson, Middlethird, on the crag to the east of the farmsteading. There was no lack of refreshments, and the health of the Royal couple was pledged with the utmost enthusiasm. Dancing afterwards commenced, and was carried on till an early hour. Huge bonfires also blazed on the farm of Eastfield, near Greenlaw, and an immense concourse of Greenlaw people gathered round Mr Grieve as he set it on fire.

Here also, as well as in several other places, the healths of the newly-married pair were pledged in a genuine bumper, and mirth and music everywhere prevailed. We question much whether any other district of the country showed more heartfelt loyalty on this occasion than did the town and district of Kelso”.

The minute book of The Tweed Lodge records the lodge’s preparation for the celebrations.  The first reference is in a minute of the meeting held on 2nd February 1863 viz:

“Thereafter the brethren agreed unanimously to intimate to the absent brethren that a demonstration should take place on the 12th day of March, being the day on which the marriage of the Prince of Wales would be celebrated.  It was proposed that the brethren should dine together in the Lodge Room provided that a sufficient number volunteered being present and to appear in proper costume as at festivals, but should it be found that the number be insufficient for a public dinner, that the brethren join the Magistrates in celebrating the auspicious event or invite any other public body to join the celebrations.  A General Meeting of the brethren to be held on Monday 9th February at 8 clock pm to settle the proper working of the event.” 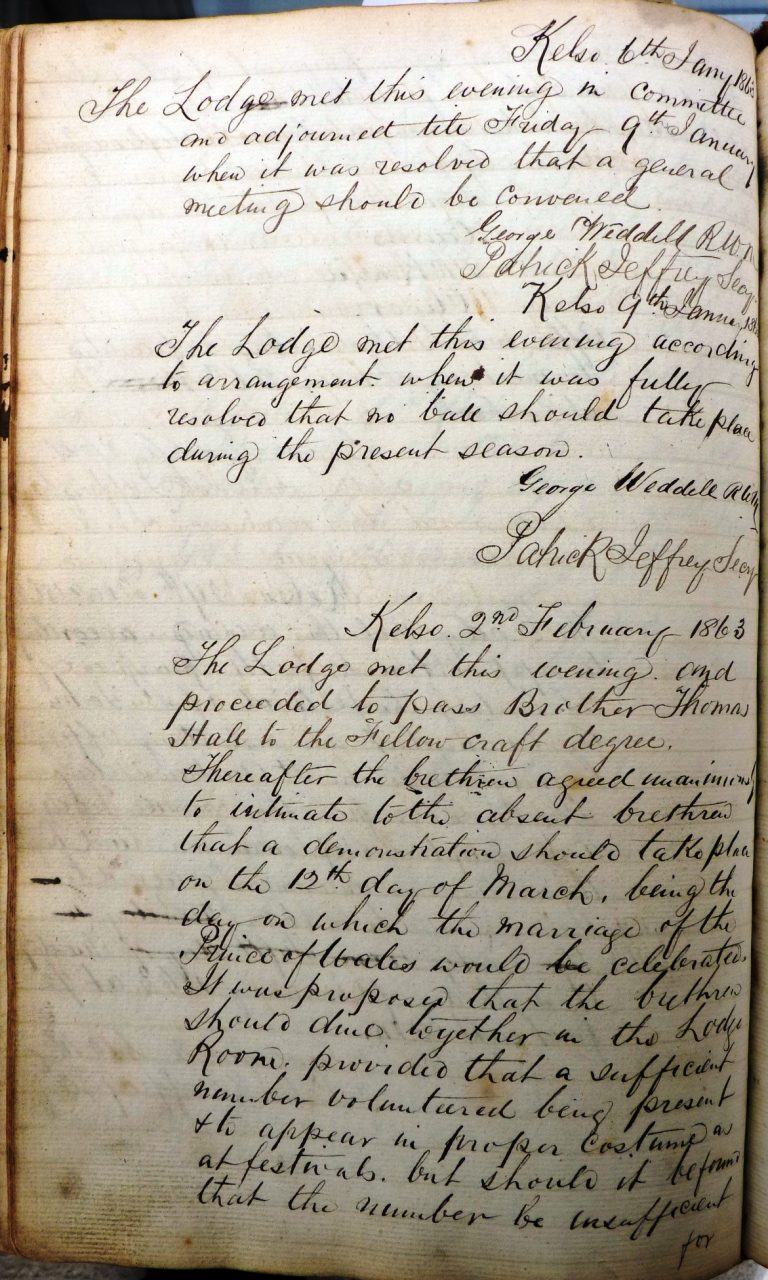 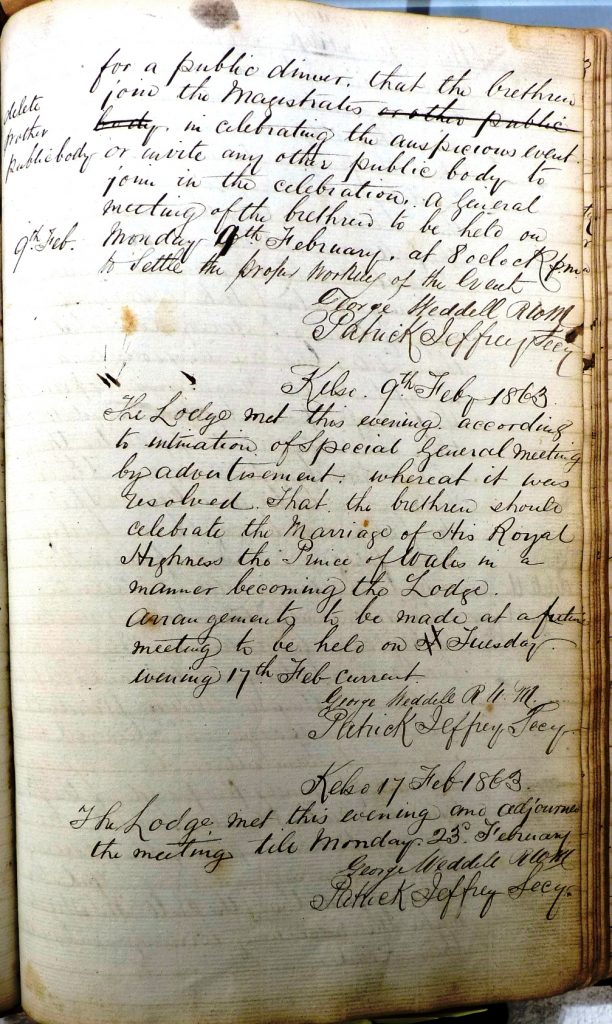 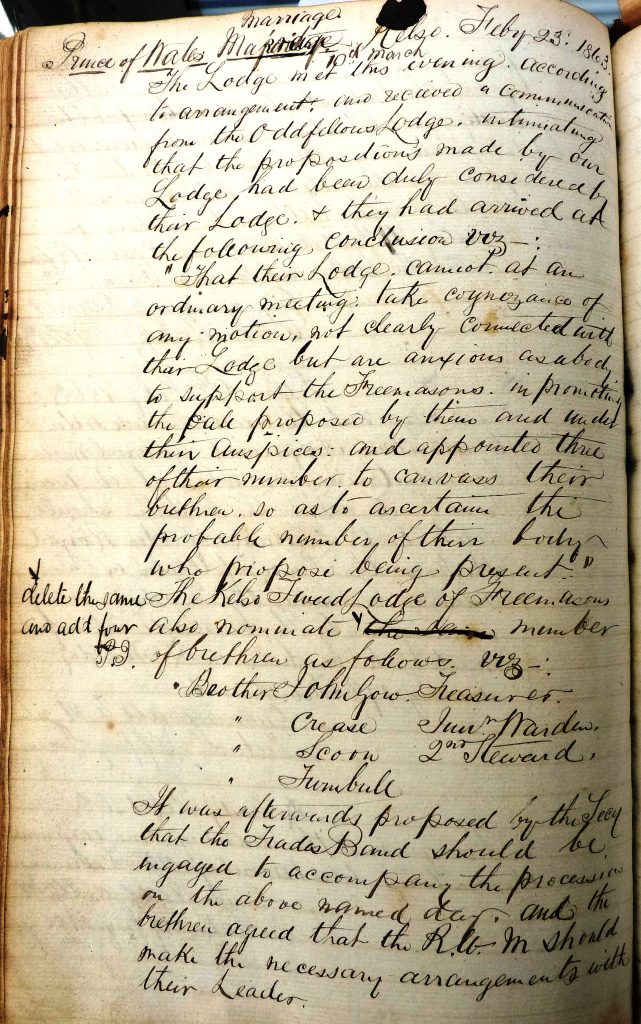 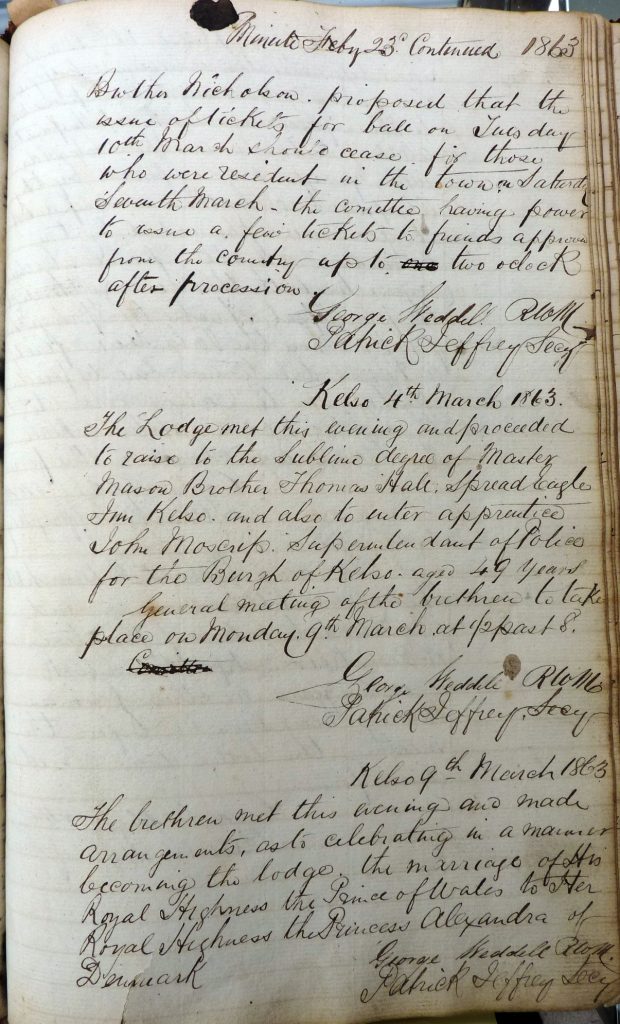 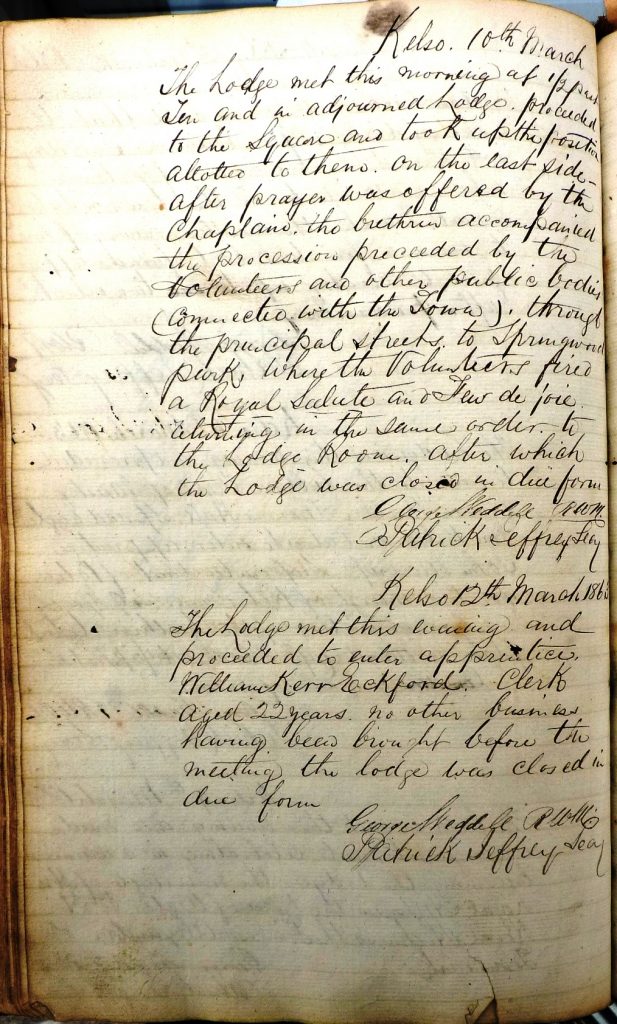