Extract from the Minute Book of the old Lodge of Kelso 58, February 1885

Note:   The extracts are verbatim and the italics are explanations, not part of the minutes.
Minutes of February 12th Meeting – Monthly
The Lodge was opened in due form by the R.W.M. and minutes of the previous Special Meeting having been approved of Brothers Robertson and Murray having satisfactory answered the questions put to them pertaining to the Fellow Craft Degree, and having received the password and grip, they were duly passed to the Fellowcraft Degree by the R.W.M Bro. Pearson; the tool being explained by Bro Jas McDougal, Brother Shearer giving the charge and the Brethren having been duly passed the Lodge was reduced.  Brother P.M. Vernon brought forward a motion “That a Funeral Lodge be held in commemoration of our later Brother James Allan# at an early date.   This was agreed to and the 2nd Thursday of March was fixed for the observation.   On the motion of Brother Vernon it was resolved to hold a Special Meeting for raising on 1st Thursday of March.   It was announced that Bro. P.M. Robert Swan had given a donation of 10/- (ten shillings) towards the Funeral Fund expenses.

# In connection with the above it ought to be mentioned that Brother James Allan was buried with all the usual solemnity of a masonic funeral a very large number of brethren attending the obsequies.   Afterwards they subscribed and raised a handsome monument in the Churchyard to his memory.   (This note is written by a different hand and has obviously been added later at the bottom of the page in the minute book).

Minutes of the Meeting of 5th March 1885
The Lodge was opened in due form by the R.W.M. Brother Pearson.  It was raised to the 2nd degree when the Candidates for the sublime Deg having answered the questions satisfactory retired to be prepared, the Lodge meantime being raised to the Master Degree when the candidates in a most impressive manner were given the S.O.B. by Bro. P.W.M. Bulman, jnr.  The R.W.M. gave the tools and charge.  The Lodge was closed in the usual manner there being no other business. 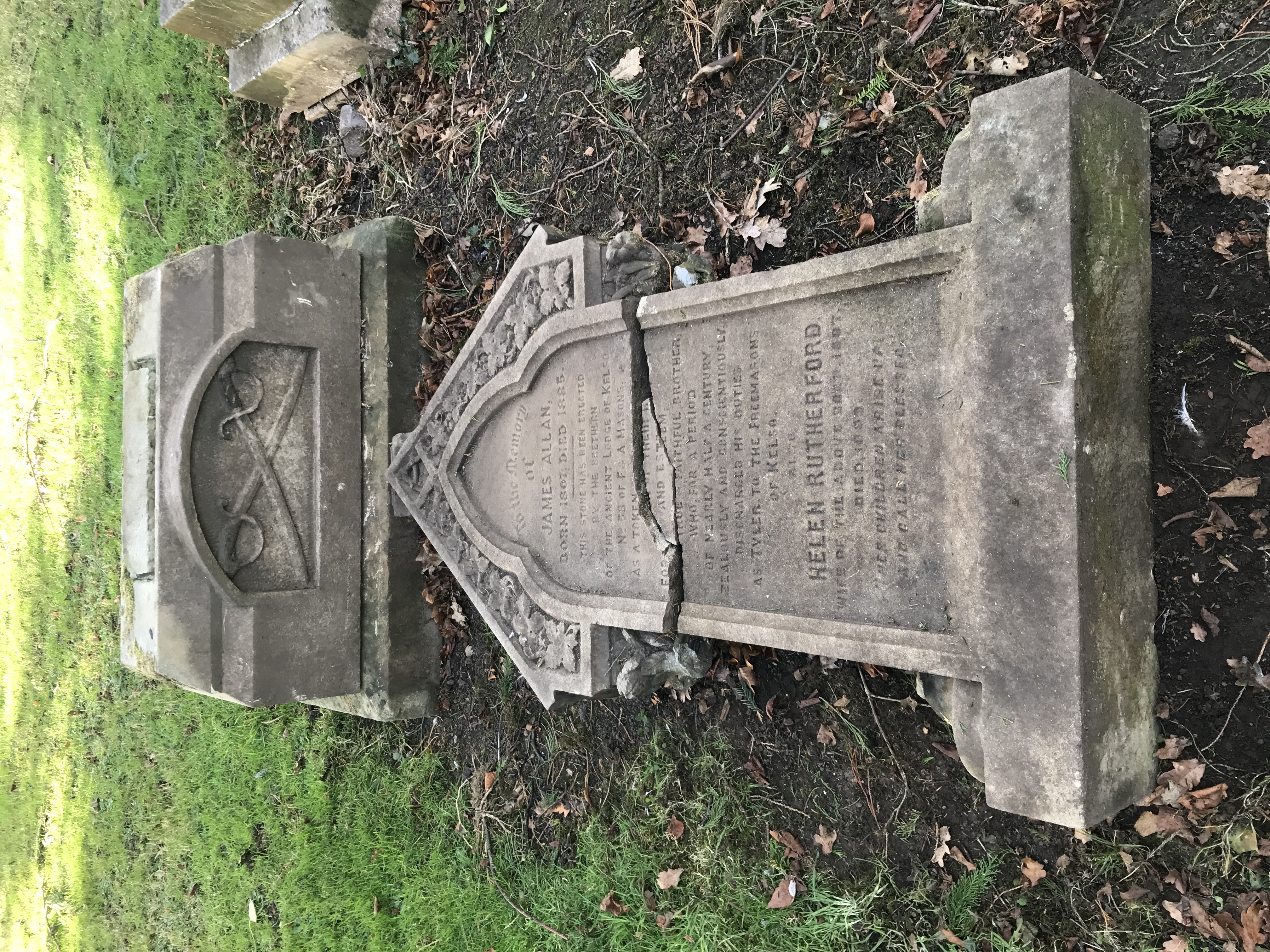 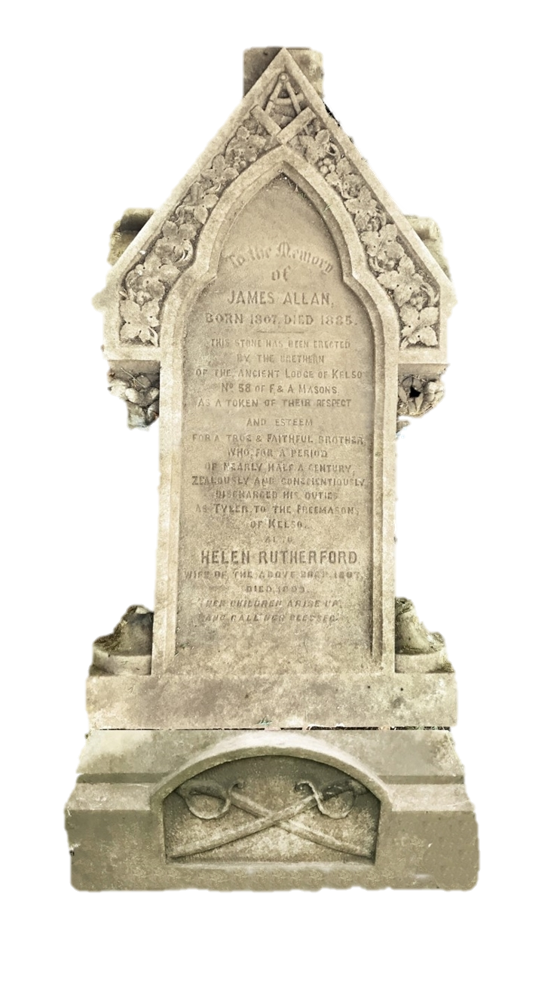 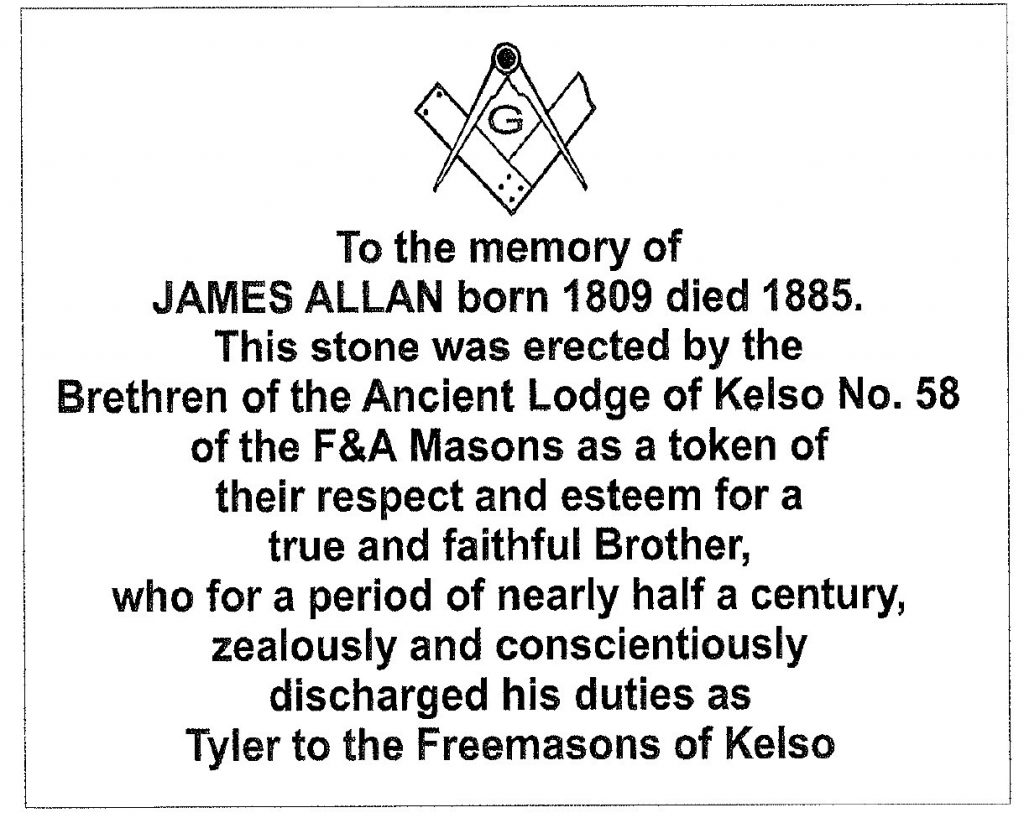 Brother Allan’s fine headstone, in Kelso Old Cemetery, had been laid flat for many years and it was the wish of Bro Jim Stenhouse PM to have it restored. In the summer of 2021 the Brethren of Lodge Kelso & Tweed  endeavoured to raise the fallen headstone but as it was broken in half it was decided to turn it face up to ascertain the state of the inscription.  With the help of Bro John Stenhouse’s neighbour and friends the stone was restored.  Fortunately, the text was still visible and now lays as a fitting tribute to a worthy Brother who had faithfully served the Lodge as Tyler for almost 50 years.