French Prisoners of War at Kelso 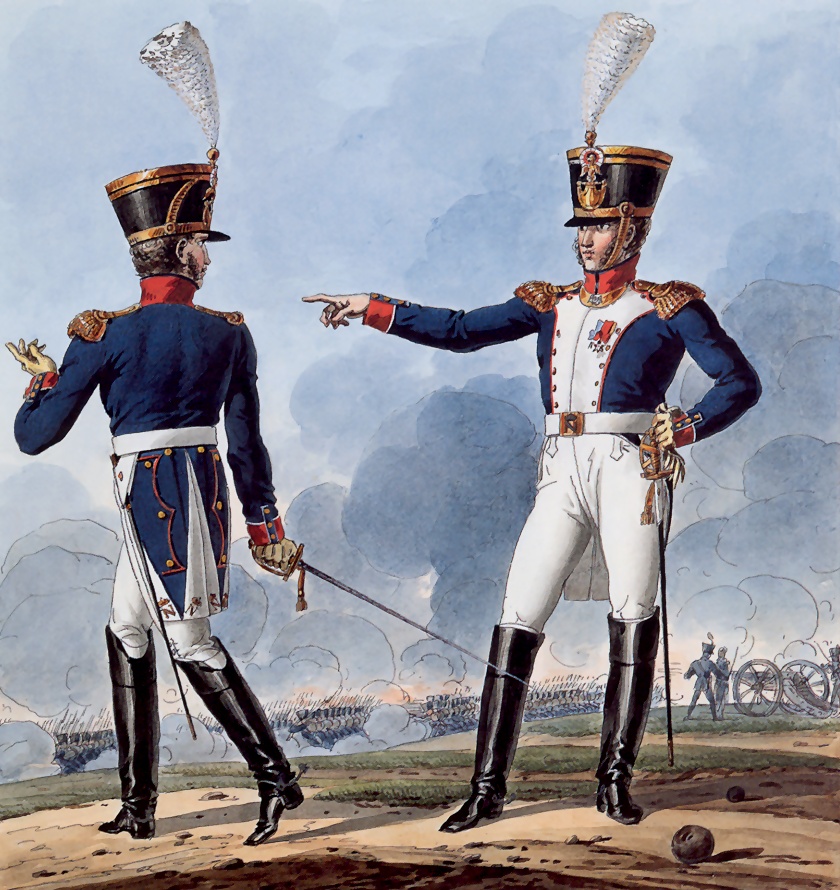 THE PRISONERS ON PAROLE IN SCOTLAND

With the great Scottish prisons at Perth, Valleyfield, and Edinburgh I have dealt elsewhere, and it is with very particular pleasure that I shall now treat of the experiences of prisoners in the parole towns of Scotland, for the reason that, almost without exception, our involuntary visitors seem to have been treated with a kindness and forbearance not generally characteristic of the reception they had south of the Tweed, although of course there were exceptions.

As we shall see, Sir Walter Scott took kindly notice of the foreigners quartered in his neighbourhood, but that he never lost sight of the fact that they were foreigners and warriors is evident from the following letter to Lady Abercorn, dated May 3, 1812:

‘I am very apprehensive of the consequences of a scarcity at this moment, especially from the multitude of French prisoners who are scattered through the small towns in this country; as I think, very improvidently. As the peace of this county is intrusted to me, I thought it necessary to state to the Justice Clerk that the arms of the local militia were kept without any guard in a warehouse in Kelso; that there was nothing to prevent the prisoners there, at Selkirk, and at Jedburgh, from joining any one night, and making themselves masters of this dépôt: that the sheriffs of Roxburgh and Selkirk, in order to put down such a commotion, could only command about three troops of yeomanry to be collected from a great distance, and these were to attack about 500 disciplined men, who, in the event supposed, would be fully provided with arms and ammunition, and might, if any alarm should occasion the small number of troops now at Berwick to be withdrawn, make themselves masters of that sea-port, the fortifications of which, although ruinous, would serve to defend them until cannon was brought against them.’

The Scottish towns where prisoners of war on parole were quartered, of which I have been able to get information, are Cupar, Kelso, Selkirk, Peebles, Sanquhar, Dumfries, Melrose, Jedburgh, Hawick, and Lauder.

For some of the following notes, I am indebted to the late Mr. Macbeth Forbes, who helped me notably elsewhere, and who kindly gave me permission to use them.

Some of the prisoners on parole at Kelso were sailors, but the majority were soldiers from Spain, Portugal, and the West Indies, and about twenty Sicilians. The inhabitants gave them a warm welcome, hospitably entertained them, and in return the prisoners, many of whom were men of means, gave balls at the inns (the only establishments in these pre-parish hall days where accommodation for large parties could be had) at which they appeared gaily attired with wondrous frills to their shirts, and white stockings.

‘The time of their stay’, says Mr. Forbes, ‘was the gayest that Kelso had ever seen since fatal Flodden.’

Here as elsewhere there were artists among them who painted miniatures and landscapes and gave lessons, plaiters of straw and manufacturers of curious beautiful articles in coloured straw, wood-carvers, botanists, and fishermen. These last, it is said, first introduced the sport of catching fish through holes in the ice in mid-winter. Billiards, also, are said to have been introduced into Scotland by the prisoners. They mostly did their own cooking, and it is noted that they spoiled some of the landladies’ tables by chopping up frogs for fricassees. They bought up the old Kelso ‘theatre’, the occasional scene of action for wandering Thespians, which was in a close off the Horse-Market, rebuilt and decorated it, some of the latter work still being visible in the ceiling of the ironmongery store of to-day. One difficulty was the very scanty dressing accommodation, so the actors often dressed at home, and their passage therefrom to the theatre in all sorts of garbs was a grand opportunity for the gibes of the youth of Kelso. Kelso was nothing if not ‘proper’, so that when upon one occasion the postmistress, a married woman, was seen accompanying a fantastically arrayed prisoner-actor to the theatre from his lodging, Mrs. Grundy had much to say for some time. On special occasions, such as when the French play was patronized by a local grandee like the Duchess of Roxburgh, the streets were carpeted with red cloth.

Brément, a privateer officer, advertised: ‘Mr. Brément, Professor of Belles-Lettres and French Prisoner of War, respectfully informs the ladies and gentlemen of Kelso that he teaches the French and Latin languages. Apply for terms at Mrs. Matheson’s, near the Market Place.’ He is said to have done well.

Many of the privateersmen spoke English, as might be expected from their constant  intercourse with men and places in the Channel. One prisoner here was suspected of being concerned with the manufacture of forged bank-notes, so rife at this time in Scotland, as he ordered of Archibald Rutherford, stationer, paper of a particular character of which he left a pattern.

Escapes were not very frequent. On July 25, 1811, Surgeon-Major Violland, of the Hebe Corvette, escaped. So did Ensign Parnagan, of the Hautpol Privateer, on August 5, and on 23rd of the same month Lieutenant Rossignol got away. On November 11 one Bouchart escaped, and in June 1812 Lieutenant Anglade was missing, and a year later several got off, assisted, it was said, by an American, who was arrested.

In November 1811 the removal of all ‘midshipmen’ to Valleyfield, which was ordered at all Scottish parole towns, took place from Kelso.

Lieutenant Journeil, of the 27th Regiment, committed suicide in September 1812 by swallowing sulphuric acid. He is said to have become insane from home-sickness. He was buried at the Knowes, just outside the churchyard, it being unconsecrated ground.

A Captain Levasseur married an aunt of Sir George Harrison, M.P., a former Provost of Edinburgh, and the Levasseurs still keep up correspondence with Scotland.

On May 24, 1814, the prisoners began to leave, and by the middle of June all had gone. The Kelso Mail said that ‘their deportment had been uniformly conciliatory and respectable’.

In Fullarton’s Imperial Gazetteer of Scotland we read that:

‘From November 1810 to June 1814, Kelso was the abode of a body, never more than 230 in number, of foreign prisoners of war, who, to a very noticeable degree, inoculated the place with their fashionable follies, and even, in some instances tainted it with their laxity of morals.’

‘Their stay here seems to have been quiet and happy, although one man committed suicide. They carried on the usual manufactures in wood and bone and basket work; gave performances in the local theatre, which was decorated by them; were variously employed by local people, one man devoting his time to the tracking and snaring of a rare bird which arrived during severe weather.’

‘The older inhabitants of Kelso remember the French prisoners of war quartered here as possessed of many amiable qualities, of which “great mannerliness” and buoyancy of spirits, in many instances under the depressing effects of great poverty, were the most conspicuous of their peculiarities; the most singular to the natives of Kelso was their habit of gathering for use different kinds of wild weeds by the road side, and hedge-roots, and killing small birds to eat—the latter a practise considered not much removed from cannibalism. That they were frivolous we will admit, as many of them wore ear-rings, and one, a Pole, had a ring to his nose; while all were boyishly fond of amusement, and were merry, good-natured creatures.’

One memorable outbreak of these spirits is recorded in the Kelso Mail of January 30, 1812:

‘In consequence of certain riotous proceedings which took place in this town near the East end of the Horse Market on Christmas last, by which the peace of the neighbourhood was very much disturbed, an investigation of the circumstances took place before our respectable magistrate, Bailie Smith. From this it appeared that several of the French prisoners of war here on parole had been dining together on Christmas Day, and that a part of them were engaged in the riotous proceedings.’

These ‘riotous proceedings’ are said to have amounted to little more than a more or less irregular arm-in-arm procession down the street to the accompaniment of lively choruses. However, the Agent reported it to the Transport Office, who ordered each prisoner to pay £1 1s. fine, to be deducted from their allowance. The account winds up:

‘It is only an act of justice, however, to add that in so far as we have heard, the conduct of the French prisoners here on parole has beenregular and inoffensive.’

On the anniversary of St. Andrew in 1810, the Kelso Lodge of Freemasons was favoured with a visit from several French officers, prisoners of war, at present resident in the town. The Right Worshipful in addressing them, expressed the wishes of himself and the Brethren to do everything in their power to promote the comfort and happiness of the exiles. Afterwhich he proposed the health of the Brethren who were strangers in a foreign land, which was drunk with enthusiastic applause.

There is frequent mention of their appearance at Masonic meetings, when the ‘harmony was greatly increased by the polite manners and the vocal power of our French Brethren’.

There are a great many of their signatures on the parchment to which all strangers had to subscribe their names by order of the Grand Lodge. The only war-prisoner relics in the museum are some swords. 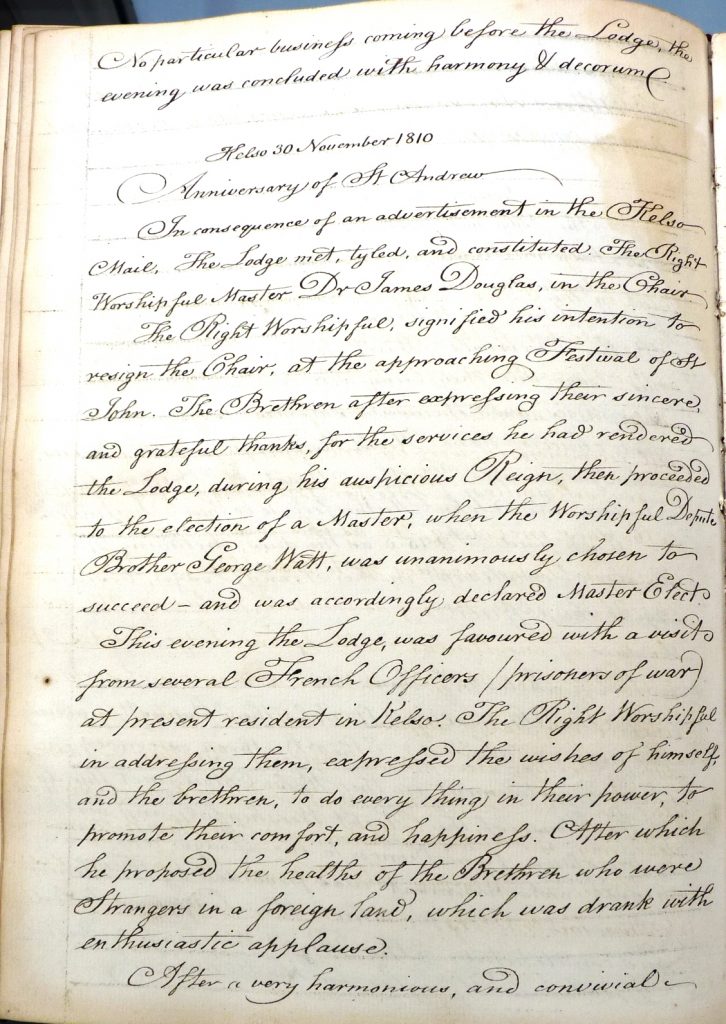 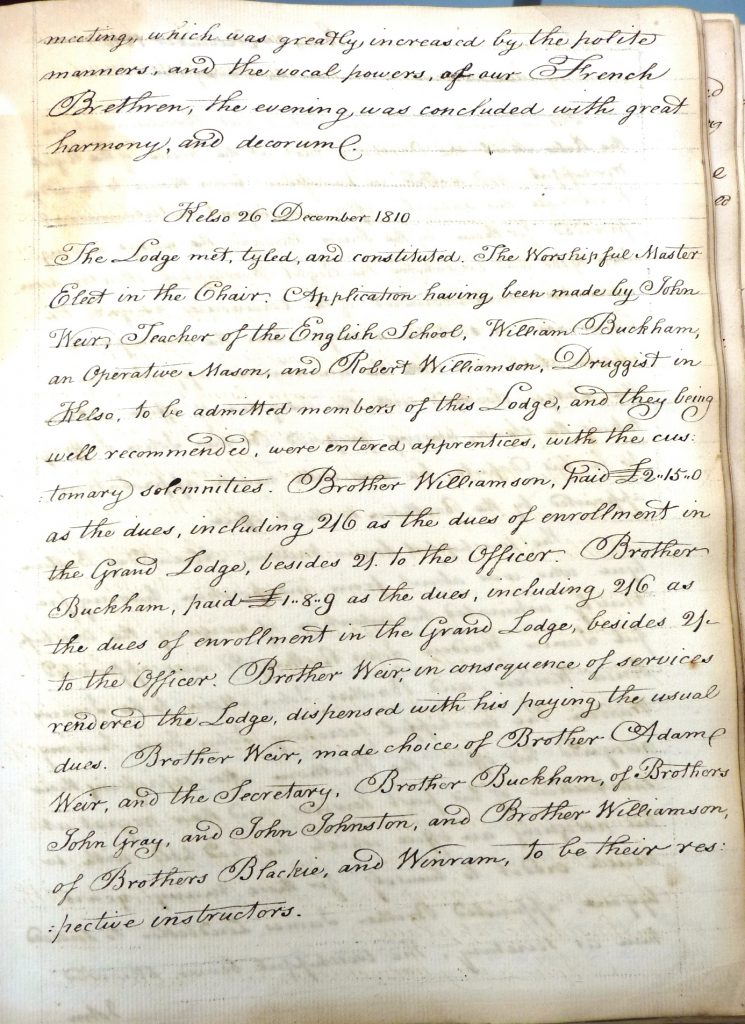 For further information about the French Prisoners of War in the towns of Cupar, Selkirk, Peebles, Sanquhar, Dumfries, Melrose, Jedburgh, Hawick, and Lauder follow the link below to the authors original publication,
https://www.ebooksread.com/authors-eng/francis-abell/prisoners-of-war-in-britain-1756-to-1815-a-record-of-their-lives-their-romance-leb.shtml