The Lodge being favoured with a visit from Brother Vincent Lunardi from the Lodge of St. Andrew in Edinburgh. And Brethren entertaining proper sense of the favour conferred by visit from Brother whose fame was justly and universally allowed well as in other countries, desired he would do them the honour of becoming an honorary member of this Lodge, with which request he in very handsome manner complied and was enrolled accordingly. At the same time Brother Lunardi was so obliging as to communicate to the Lodge the following particular account of his Ascent and Aerial excursion from this place on Friday last the 21st current-To wit,

“As soon as he got up, he could plainly perceive the and that his course was towards it. Twenty minutes after his ascending with his balloon he got into a cloud and lost sight of the earth, he might have gone through it to enjoy the higher region where there is always a fine clear sky, but thought proper to keep himself down, to give pleasure to the spectators. At 25 minutes past two, he was only 4000 feet above the surface of the earth: he then observing the sea to be about 10 miles from him, he began to ascend higher and when at the height of 6000 feet the west wind above was stronger than below. He went through the cloud, and for two minutes observed the clearness of the sky above, and the thickness of the clouds beneath; his intention was to go in search of another current of air but having no signals (the signals are small balloons which are occasionally sent up to try the current of in the higher regions) above for it and being so near the sea he thought proper to come in sight of the earth again, which he effected in three minutes. At three o’clock precisely he was no higher than 8000 feet from the surface of the earth and went horizontally at that height five minutes; he then began to descend as he thought the sea to be no more than a mile from him.

At 20 minutes after three, he anchored at Doddington Moor about four miles north east of Wooler, where several country people were collected but they were afraid to approach him: he called to them and after repeated entreaties they at length came up to him. Mr Lunardi then enquired how far he was from the sea and they told him 4 miles. Here, Mr Strother, Ancrum, who had followed him on horseback for two miles came up and shook hands with him. He desired six of the country people to draw him the ropes to Berwick, but after having carried him about two miles,the wind blowing fresher and in opposite direction the men were not able hold the Balloon. He came down in a Held near Baremoor where he emptied the balloon, with the assistance of the people who were coming from every quarter. When Mr Lunardi alighted, he had 60 lbs of ballast remaining, which made him regret much his not being able to proceed farther, on account of the sea being so near.””

According an to author of that time, W. Fred Vernon, in the old minute book he inscribed his name “Vincent Lunardi of Lucca, Italy, October the 24th October 1785” immediately below he made a very fair sketch of this balloon. Whist the minute book records the meeting, the sketch is now missing. Lunardi was great lion in his day, and was fated and flattered wherever he went, and some idea of his popularity may be gathered from the fact that the fashionable bonnet of the period was called after him, as witness Burns’ lines in his well-known poem “To a Louse”,

I wad na been surpris’d to spy
You on an auld wife’s flainen toy;
Or aiblins some bit dubbie boy,
On’s wyliecoat;
But Miss’ fine Lunardi! fye!
How daur ye do’t? 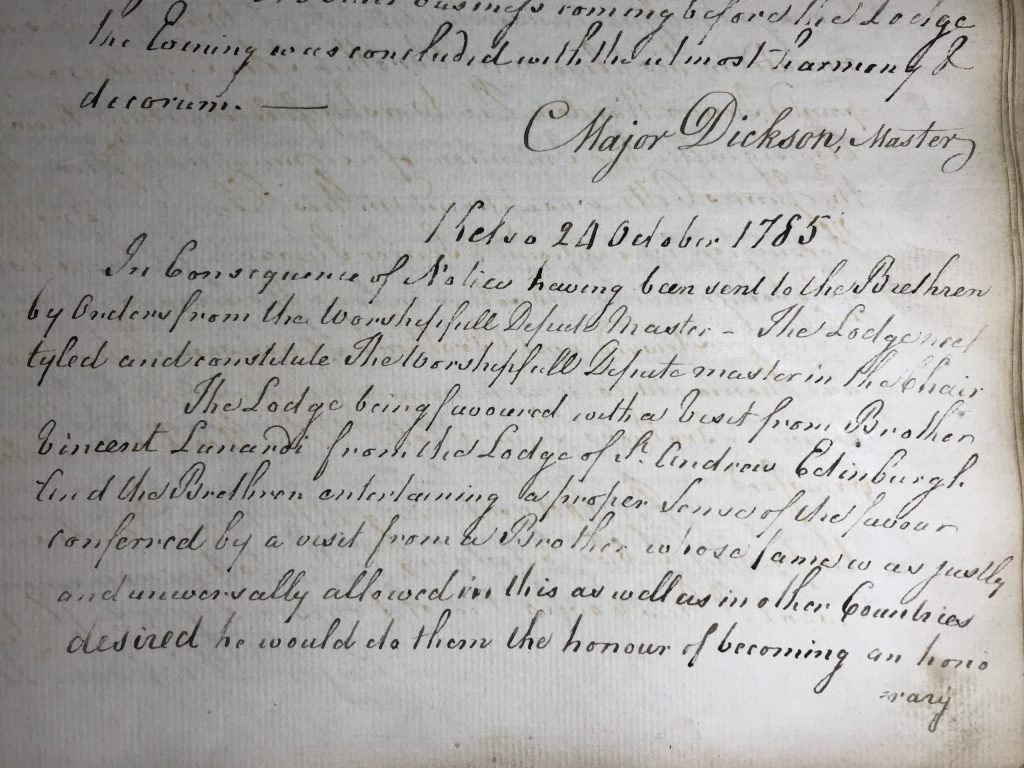 Copy of part of the the original minute