“Although there are no documents to prove that the Lodge was in existence before the beginning of the eighteenth century, the earliest minute extant being the date 1701, yet, from internal evidence, it must have existed and been in working order prior to that time, for this minute refers to previous meetings or “former sederents” as they are termed. Mention is also made of “acts” or laws of which there is now no trace, and from the fact that at this time fines for absence were exigible, we conclude that the Lodge must have been in full operation and in regular working order for a considerable period. We have also a reference, in the minutes of the meeting of 28th December, 1702, to a meeting held on the 2nd of June, 1701, or six months previous to the first preserved record, which we quote verbatim with its quaint orthography:”

Sederent: A meeting or sitting of a court or in this case the Lodge, a meeting or minute.  (TJS). 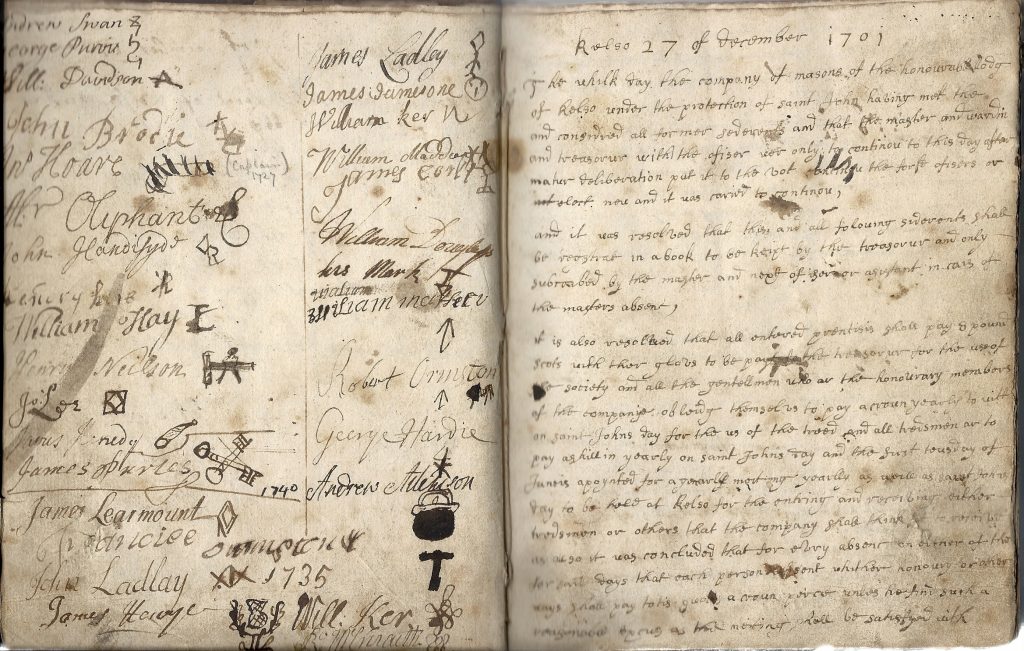 The whilk day the companie of the honourable Lodg of Kelso, under the protection of Saint John, having met there and considered all former sederents, and that the Master and Wardin and Treasurer, with the ofiser wer only to continou to this day. After matur deliberation, put it to the vot, continou the first ofisers, or elect nou, and it was carried to continou.

And it was resolved that this and all following sederents shall be registrat in a book to be kepit by the Treasurer, and only subscribed by the Master and next ofisor, or assistants, in case of the Master’s absens.

It was also resolved that all Enterd Prentises shall pay eight pounds Scots, with their glovs, to be paid to the Treaserur for the use of the society, and all the gentlemen who are the honorary members of the companie, obleidg themselves pay acrown yearly, to wit, on Saint John’s Day, and the first Tuesday of June is appointed for a yearly meeting. yearly as well as Saint  John’s Day, to be held at Kelso, for the entering or recording either treedsmen or others that the companie shall think fit to record, as also it was concluded, that for every absent on either of the for said days, that each person absent, whether honorary or otherwise, shall pay a crown piece, unless he find such a reasonable excus as the meeting shall be satisfyd with, which is to be contained in the sederent of the day. The companie also resolved that when an entered prentis is registrat as Master or fellow of the Craft, that he must pay fyv shillins, with with new gloves, to the society. It was also resolved that fyns be received by the Treasorur as well as the other funds, which money, or pairt of it,  is to be dispursed of the sight of the Master, Wardin, and  Treasorur to indigent persons or other ocaisons in which the honour or interest of the company is concerned, they being aways answerable for their debursments to the next meeting, and amercirats [amerces] all the absents from this day’s meeting according to the said penaltis, of which absents the Treasurer is to present a list to the next meeting, himself being in the frontis peis of the roll. And it is furder concluded that all former fines are remitted to the discretion of the persons lyable for the entertainment of the company, and the society orders a fortie part to ther ofisors,which is not to be a precedent for others.”

Bro Vernon continues… “From the above minute it is clearly apparent that the Lodge had been in working order for some considerable time, as “all former fines” are spoken of; the existence of fines showing that in the working of the Lodge it had been found necessary to impose a penalty in certain cases for the better  carrying out of the work.”

The suggestion by Bro Vernon of an earlier existence of the lodge is challenged by the highly respected Masonic (although not a Freemason) historian Prof David Stevenson in his seminal work: The First Freemasons: Scotland’s Early Lodges and Their Members (Aberdeen, 1988 p117). He writes: “… with a confidence at first sight that the lodge has long existed, but closer examination makes it quite likely that it was only being formed.” He then refers to the minutes concluding that: “Taken together, these references indicate that the lodge was just coming into existence in December 1701, with the previous meetings referred to having been held to make preliminary arrangements for its foundations by electing provisional officer holders and drawing up an ‘obligation’ a mutual oath for members binding them to the lodge.” (There is a much more detailed analysis of the first minutes in his book). 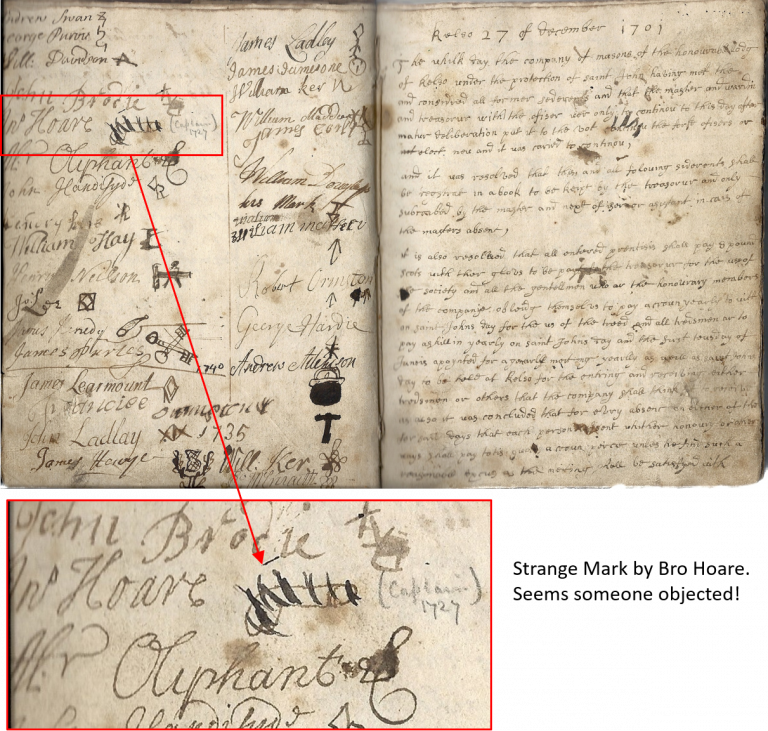