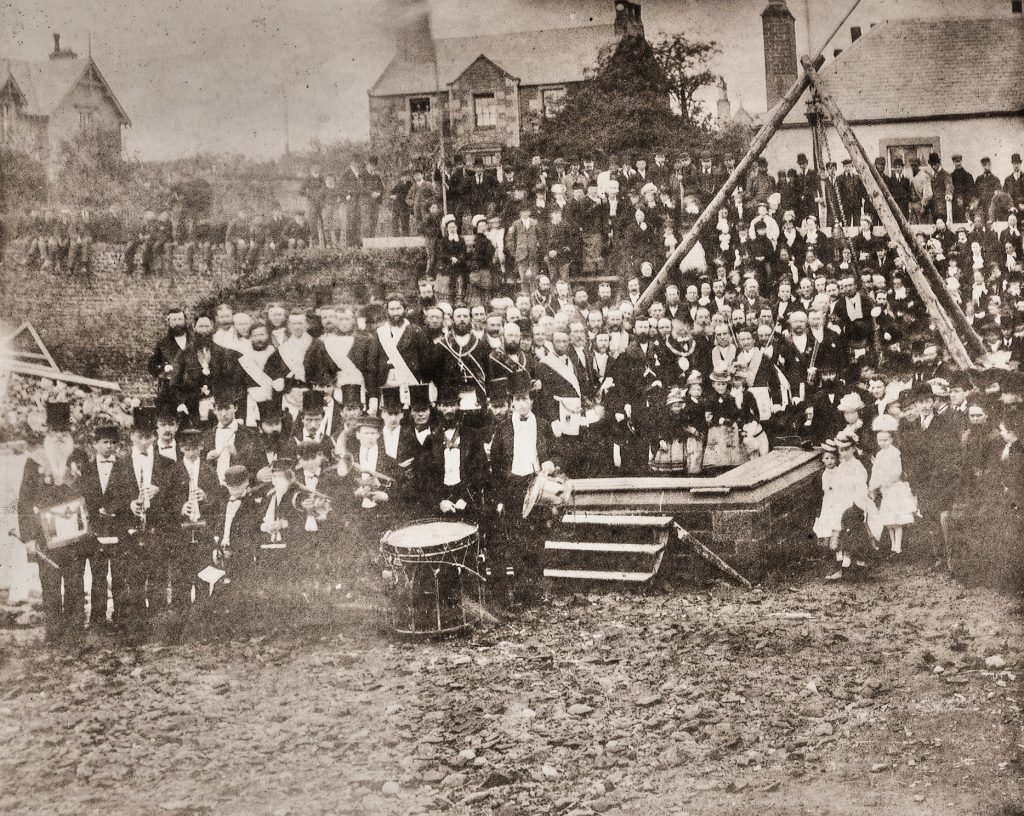 The old school is now the site of Grove House. The building in the top left of the picture is
Colville House which still sits in Forestfield.

A special meeting was held this day in the Lodge Room under the presidency of Most Worshipful Depute Grand Master of Scotland Brother H Inglis of Torsonce and the officers of Grand Lodge together with various deputations from sister lodges came to assist at the laying of the foundation stone of the new High School at Kelso.

The Lodge was opened at 2 o’clock by of Most Worshipful Depute Grand Master in ample form in the presence of nearly one hundred Brethren who thereafter matched in procession headed by His Grace the Duke of Roxburgh’s band, under the conductorship of Brother Oliver, to Edenside Road where the stone was to be laid. The route taken was from the Cross Keys along Bridge Street, through the Manse Gate past the house where the Rev Jas Smith received the Brethren, then out by the gate at the back of the Abbey, around the Abbey along Bridge Street, down Wood Market to the site of the new building.

The ceremony having been performed with all the usual rites and circumstance incidental to the occasion, in the presence of some hundreds of ladies and gentlemen, who were accommodated upon a platform erected by Brother Layton, Rector of the High School. The Brethren then returned by way of Horse Market to the Lodge Room where the Lodge was closed.

Thereafter the Brethren sat down to a banquet in the old Tweed Lodge which had been specially decorated for the occasion by Brothers Crease, Maxwell and Vernon. Brother H Inglis the MWDGM presided supported by on the right by the Right Worshipful Master Bro Vernon on the left by Bro Layton, the croupier being Bro J Steel. A most enjoyable afternoon was spent, the following being the programme of proceedings.

In the evening a carpet dance was held in the Lodge Rooms at which a number of Brethren and their wives and daughters were present. The dancing was kept up with great spirit until an early hour. 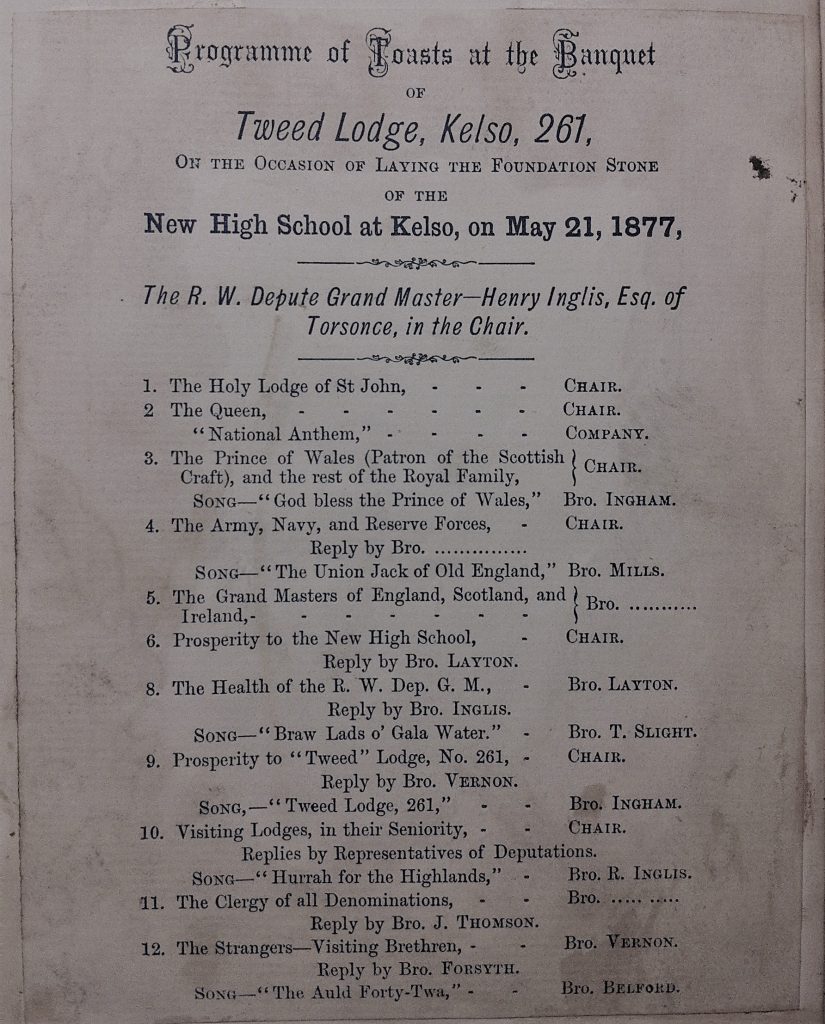 A copy of the original program extracted from the minute book

The Stone has been Found! 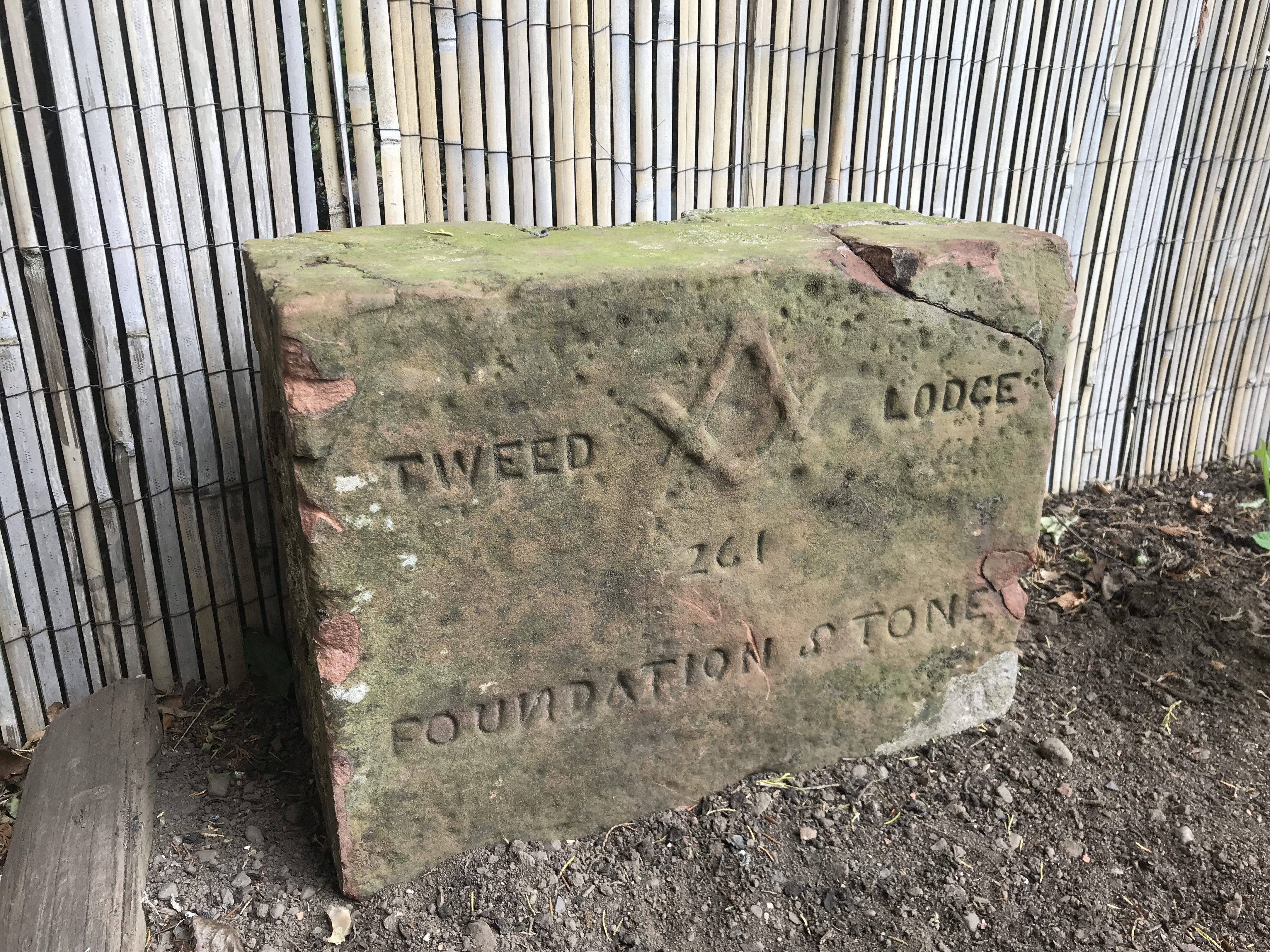 When the old High School was demolished the late Brother Charlie McIntee rescued the stone from the rubble. For many years it sat at the entrance to the old Lodge Rooms in Abbey Row. After the Lodge was relocated to Shedden Park Road the stone lay in Brother Jim Wilson’s garden at Haymount. It now sit in the allotment at Broomlea under the care of Brother Tim Slater.
June 2022